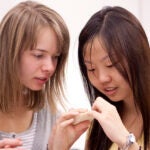 SEAS design fair on May 1

A Harvard School of Public Health (HSPH) youth fitness and nutrition initiative conducted with the YMCA of the USA was found to effectively boost physical activity levels and time spent doing moderate and vigorous exercise among children 5-11 years of age enrolled in after-school programs at YMCAs in four U.S. metropolitan areas, according to a paper published in the March 2012 print issue of Medicine & Science in Sports & Exercise.

In this evaluation, Gortmaker and his colleagues evaluated the impact of the intervention at 16 YMCAs and 16 YMCA program controls. Staff set goals for health promotion at their sites and used an evidence based curriculum called Food and Fun After School (www.foodandfun.org) to connect with families and help children develop healthy habits. The intervention was directed to all children attending the after-school programs, not just those who were overweight. The children’s progress was tracked over five days using an electronic device called an accelerometer that tracked their activity levels.