When cells reach their breaking point 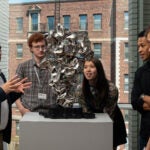 For cells, effectively managing stress can be the difference between life and death. But why some cells master the art of stress management while others succumb to the pressure isn’t well understood.

Researchers led by Quan Lu, associate professor of environmental genetics and pathophysiology at the Harvard T.H. Chan School of Public Health, recently published a study in the Proceedings of the National Academy of Sciences (PNAS) that sheds light on the process that allows cells to bounce back from periods of intense stress and return to a healthy state. The findings, Lu said, could lead to new drug targets for a range of ailments, including diabetes, cancers, and neurodegenerative disorders.

Many factors can inflict stress on a cell. One common scenario begins with the endoplasmic reticulum (ER), an organelle within a cell that acts like an assembly line, synthesizing and delivering essential proteins, including those that sit on the cell surface. Each protein the ER produces is folded in a specific shape and serves a precise role. But sometimes the system malfunctions, resulting in proteins that are misfolded and that clog up the ER’s production process. When that happens, various molecules in the cell sense something is amiss and sound a proverbial alarm bell, which triggers a stress response — think of a factory foreperson shutting down an assembly line to get everything back in order.

When a cell’s stress response kicks in, one of two things will happen: The cell either works out the kinks in the system and gets up and running again, or it’s overwhelmed and self-destructs, a process scientists call apoptosis. To date, Lu said, scientists have largely focused their efforts on analyzing the cascade of events that leads to apoptosis. But far less attention has been paid to understanding what happens inside cells that survive the stress response and return to a fully functional state.

“The critical question we pose in this paper is how does the cell know what its breaking point is?” Lu said. The answer, in part, lies in a gene called L3MBTL2.

Using the gene editing tool CRISPR, Lu and his team were able to look at how different genes affect the stress response, and they homed in on L3MBTL2 because it appears to play a protective role for cells. When L3MBTL2 was removed from cells and Lu’s team induced a stress response by exposing the cells to arsenic — a toxic element commonly found in the environment — the cells died. When they overexpressed the gene,  or made more of the proteins that the gene consists of, the cells had a higher threshold for stress and didn’t self-destruct.

From a public health perspective, the findings are especially intriguing as Lu noted that the ER produces secretory proteins, including insulin and beta-amyloid, which are implicated in diabetes and Alzheimer’s disease, respectively. Understanding how L3MBTL2 affects ER-related stress responses may lead to new insights into how these diseases develop.