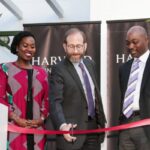 The 2017 Warren Alpert Foundation Prize has been awarded to five scientists for transformative discoveries in the field of cancer immunology.

Collectively, their work has elucidated foundational mechanisms in cancer’s ability to evade immune recognition and, in doing so, has profoundly altered the understanding of disease development and treatment. Their discoveries have led to the development of effective immune therapies for several types of cancer.

The 2017 award recipients are:

The honorees will share a $500,000 prize and will be recognized at a day-long symposium on Oct. 5 at Harvard Medical School.

The Warren Alpert Foundation, in association with Harvard Medical School, honors trailblazing scientists whose work has led to the understanding, prevention, treatment or cure of human disease. The award recognizes seminal discoveries that hold the promise to change our understanding of disease or our ability to treat it.

“The discoveries honored by the Warren Alpert Foundation over the years are remarkable in their scope and potential,” said George Q. Daley, dean of Harvard Medical School. “The work of this year’s recipients is nothing short of breathtaking in its profound impact on medicine. These discoveries have reshaped our understanding of the body’s response to cancer and propelled our ability to treat several forms of this recalcitrant disease.”

The Warren Alpert Foundation Prize is given internationally. To date, the foundation has awarded nearly $4 million to 59 scientists. Since the award’s inception, eight honorees have also received a Nobel Prize.