Uncovering the toxic effects of saturated fatty acids on cells 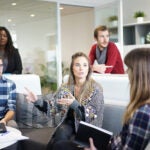 Gender-diverse companies thrive only in areas that embrace diversity

New research led by Harvard T.H. Chan School of Public Health has identified numerous genes that influence how cells respond to saturated fatty acids. Some of these genes have promise as potential therapeutic targets for treating metabolic diseases associated with lipotoxicity, including obesity, diabetes, and heart failure.

“This study, which analyzes all genes in the human genome, provides a wealth of new information for how saturated fats harm cells. It not only sheds light on the biology but also identifies a number of new targets for possible therapies,” said corresponding author Robert Farese Jr., chair of the Department of Genetics and Complex Diseases at Harvard Chan School.

The study was published in Molecular Cell. The findings were reported from the laboratory of Farese and Tobias Walther, who study lipid metabolism in a joint laboratory.

Saturated fatty acids, which are found in foods such as red meat, cheese, and butter, are generally considered bad for health and can raise levels of “bad” LDL cholesterol. When consumed, saturated fatty acids are processed in many different ways. They can be used by cells as building blocks for membrane lipids, stored in lipid droplets, or used to modify proteins. While it’s known that the accumulation of saturated fatty acids can lead to cell and tissue “lipotoxicity,” a metabolic syndrome that is associated with various diseases including diabetes and obesity, very little is known about the various cellular pathways involved in mediating and modifying the toxic effects of saturated fatty acids.

In this study researchers exposed human cells to the saturated fatty acid palmitate, which is found in palm oil. They then examined how this exposure affected a cell’s RNA and its lipids, as well as the genetic interactions that occurred in response to palmitate.

Using genome-wide screening technology, the authors also identified dozens of genes that can protect a cell from or sensitize a cell to the detrimental effects of palmitate. In doing so, the study highlighted several unexpected pathways that could potentially serve as new therapeutic targets for diseases associated with lipotoxicity. Among the potential targets is the gene RNF213. The researchers said they were surprised to discover that RNF213, which had not previously been implicated in lipid maintenance before, acts as an important regulator of lipotoxicity.