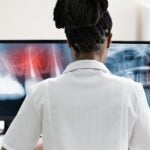 The Undergraduate Department of Statistics Prize was founded in 2020 and is given annually to the graduating senior concentrator for their superb coursework in the concentration and for an outstanding thesis. The Arthur P. Dempster Fund supports and recognizes promising graduate students who have made significant contributions to theoretical or foundational research in statistics.

Nair officially became a statistics concentrator only a few months before Commencement. His thesis on “Randomization Tests for Adaptively Collected Data” was supervised by Professor Lucas Janson. It focused on methodology for determining the effectiveness of a treatments in clinical trials.

“When decisions are built on previous data, there are a lot of complicated dependencies that make it harder to know what influences the outcome of the patient,” Nair said. “My project with Lucas was to figure out in a regime where you are assigning treatments adaptively, how can you still infer which treatments are working or if their impact is changing over time?”

Chattopadhyay’s paper was titled “On the implied weights of linear regression for causal inference” and was supervised by Professor Jose Zubizarreta.  Chattopadhyay’s research focuses on exploring how to efficiently learn about causal effects. This paper, broadly speaking, analyzes how regression methods in statistics answer causal questions.

“People make causal statements all the time: for example, my headache or my blood pressure was reduced because I took this medicine,” Chattopadhyay said. “I was interested in working on causal inference because of how fundamental it is and relevant to practical applications.”