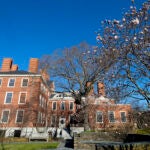 “As we pay tribute to the Truman Foundation’s president for over 20 years, Secretary Madeleine Albright, it is our responsibility to carry on her work as a tireless champion of democracy, human rights, and public service,” Terry Babcock-Lumish, the Foundation’s Executive Secretary, said in a statement. “Selected from across America, the 2022 Truman Scholars reflect our country as innovative, purposeful, patriotic problem-solvers, nevery shying away from a challenge.”

“It feels incredible. I am still kind of at a loss of words,” Kambath said. Applying for the Truman gave her the opportunity to reflect on her studies and work at Harvard, the San Ramon, California native added. She has dedicated her studies on mass incarceration and the study of violence in the criminal legal system.

While at Harvard, the 21-year-old served as a research fellow at the Radcliffe Institute and worked with Sandra Susan Smith, Daniel & Florence Guggenheim Professor of Criminal Justice at Harvard Kennedy School; Professor of Sociology at the Faculty of Arts and Sciences; and Carol K. Pforzheimer Professor at Radcliff. She intends to pursue a J.D.-Ph.D. to study the criminal legal system and what it takes to create real economic opportunities.

Samey said being named reassured her that the way she looks at and thinks about the world has the potential to impact people in a positive way. At Harvard, Samey sought courses that take a look at the importance of preventative medicine and serves as the second-ever Black Chief of CrimsonEMS.

“A lot of times when you go to a school like Harvard, it feels like everyone’s doing these grand things like doing research here and doing internships there. I felt not smart enough to be here because I’m not doing exactly what everyone else is doing. But in a way, the things that I have been doing have led me to this path,” she said. “That was reassuring that I’m on a path to really impact the world.”

As a Truman Scholar, the 21-year-old Mather resident hopes to pursue an MD-MPH program “to bridge the gap between care providers and the people that they serve.”

The two recipients are looking forward to connecting with others in the Truman community to build relationships and gain guidance. The Truman Scholarship was established by Congress in 1975 as the living memorial to President Harry S. Truman and a presidential monument to public service. The Truman Foundation has aimed to support Americans from diverse backgrounds to serve as public service leaders. Since the first awards in 1977, more than 3,400 students have been named Truman Scholars. Nearly 400 Harvard students have won the Truman Scholarship since 1978.