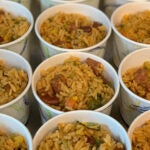 Harvard chef cooks with, and for, the community

During isolation, the Graduate Commons Program (GCP) has had to get creative about the ways in which they maintain connections to students. Before COVID-19 arrived, GCP staff could host upwards of a dozen events each month ranging from networking happy hours to fireside chats with faculty, all to help residents living in Harvard Housing build community among neighbors. Last March, when the usual way of doing things had to change, all programs were moved to virtual platforms. While game nights, book clubs, and art making classes proved possible online, residents also reported that by May, they were beginning to feel “Zoomed out.”

Inspired by videos circulating social media of artists and DJs performing free shows from their balconies, GCP Senior Program Manager, Ashley Johnson, reached out to Peg Gaillard of So Good Sounds with an idea for a “Courtyard Concert Series” that could both support local musicians and entertain residents. Each Friday night, a different artist performs a live one-hour set from a courtyard within Harvard Housing. To maintain social distancing measures, residents were instructed to either listen from their balconies or windows, or stream the show live from GCP’s Instagram page.

The series kicked off on May 15 with Sam Robbins performing live from Botanic Gardens. A Portsmouth, New Hampshire native and Berklee College of Music alumnus, Robbins was once a contestant on NBC’s “The Voice,” and plans to release a full album later this summer. Rachel Sumner, a Somerville resident, serenaded listeners with indie-folk covers and a few originals in Holden Green on May 29. Dwayne Haggins delighted residents on May 22 at 1 Western Ave., and closed the series on June 5 at Peabody Terrace to thunderous applause from the balconies above.

“So Good Sounds was delighted to collaborate with GCP on the Courtyard Concert Series” Peg Gaillard said. “Our local musicians were thoroughly delighted to get out and perform for a live audience they could see and hear, even at a distance. At So Good Sounds we believe in the power of sharing live music and clearly GCP does too! At this challenging time, we had to get creative about how to do this. I so appreciate GCP’s willingness to support our local musicians and make this happen despite the challenges.”

Eva Gottschalk was one of the residents listening from Peabody Terrace. “The mood was incredible” she said. “This music and space gave me so much. Going to concerts used to be one of my favorite things to do, so this did bring a bit of normalcy. … I felt this hour really provided the chance to pause, to remember the beauty of life. We need this!”

After receiving positive feedback, GCP plans to resume the series later this summer, and may even spotlight talent within to Harvard community.