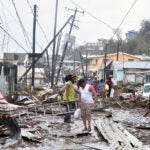 Couples who ate more fish were more likely to conceive, and had more frequent sexual intercourse, than those who ate less, according to a new study from Harvard T.H. Chan School of Public Health.

“Seafood may help in semen quality, ovulation and other markers,” said Audrey Gaskins, research associate at Harvard Chan School and lead author of the study, in a May 23, 2018 New York Times article.

Senior author of the study was Jorge Chavarro, associate professor of nutrition and epidemiology at Harvard Chan School.

Read the New York Times article: Is Fish the Food of Love, and Babies?

Read a UPI article: More fish in the diet could boost sex lives and fertility