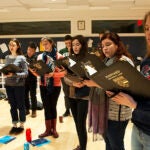 The burden of colorectal cancer is staggering. In 2018, it was the third-most commonly diagnosed cancer among both men and women in the U.S., and data indicate that younger adults are increasingly being diagnosed with it.

To help develop new treatments and preventive measures to stop the disease, Cancer Research UK has awarded roughly $26 million to a team of researchers at Harvard T.H. Chan School of Public Health, the Dana-Farber Cancer Institute, and Harvard Medical School. The funding, announced on Jan. 22, is part of Cancer Research UK’s Grand Challenge competition — an international funding initiative that aims to answer some of the biggest questions facing cancer research.

“The colon is the most densely populated microbial environment on the planet. We’ve assembled a global team with a lifelong interest in the microbiome and its huge impact on human health. We’ve already identified certain types of bacteria that appear to be associated with a greater risk of colorectal cancer, but that’s just the tip of the iceberg,” said Wendy Garrett, professor of immunology and infectious diseases at Harvard Chan School and one of the team’s co-principal investigators.

“In this project we hope to understand how the microbiome influences a cancer’s response to treatment, develop new treatments that alter the microbiome, and explore how a person’s external environment may affect their microbiome and colorectal cancer risk.”

The project is called OPTIMISTICC, short for Opportunity to Investigate the Microbiomes Impact in the Science and Treatment of Colorectal Cancer.

“With new genomic technologies, we can map the microbiome in incredible detail, so now is the right time to be investigating this phenomenon of cancer. With this information, we hope to develop new microbiome-targeted therapies for colorectal cancer,” said Matthew Meyerson, of the Dana-Farber Cancer Institute and Harvard Medical School, who is also a co-principal investigator on the team.

The team now joins a growing community of Grand Challenge researchers, which first launched in 2015 and already includes four international teams announced in 2017.

“I’m not aware of any funding opportunities anywhere in the world that can begin to integrate this many international cancer experts on projects of such clear importance,” said Edward Harlow, member of the Grand Challenge advisory panel and professor of cancer education and research at Harvard Medical School.

The OPTIMISTICC team includes researchers in the U.S., Canada, the U.K., the Netherlands, and Spain.

“Individually, these research teams are among the best in the world in their respective fields. By bringing them together across borders, Grand Challenge is enabling these teams to think bigger and establish new and exciting collaborations,” said Iain Foulkes, Cancer Research UK’s executive director of research and innovation.

Other Harvard Chan School members of the team include Curtis Huttenhower, professor of computational biology and bioinformatics.