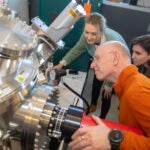 Recent graduates of the Class of 2020 Catherine Kerner, Cecil Williams II, and Adele Woodmansee received the Taliesin Prize for Distinction in the Art of Learning this week.

Kerner concentrated in computer science and philosophy, Williams in folklore & mythology, and Woodmansee had a joint concentration in integrative biology and anthropology. They were recognized by a four-member faculty committee for making insightful choices in their coursework, overcoming challenges, and exploring new fields of study.

The prize, announced by the Division of Arts & Humanities, was created this year to honor graduating seniors who exhibit curiosity and an intellectually adventurous spirit throughout their time as Harvard undergraduates. The Taliesin Prize is named for the sixth-century poet noted for enlightenment and inspiration and was conceived as a way to honor scholarly inquiry outside of the conventional benchmarks of a GPA or thesis.