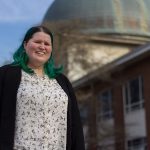 The NHFP enables outstanding postdoctoral scientists to pursue independent research in any area of astrophysics. The fellowships provide up to three years of support for awardees at the research center of their choosing in the United States.

Once selected, fellows are placed in one of three categories corresponding to broad scientific questions NASA seeks to answer about the universe:

Kirk Barrow — Hubble Fellow
Kirk Barrow was born in Houston, Texas and grew up in both the United States and Jamaica. After receiving a B.S. and M.S. in aerospace engineering, he went on to receive a doctorate in physics from the Georgia Institute of Technology in Atlanta, Georgia. Since the fall of 2018, Barrow has been a Porat Postdoctoral Fellow at Stanford University and the SLAC National Accelerator Laboratory in Palo Alto, California.

Barrow’s research is in computational cosmology with an emphasis on observations of high-redshift phenomena using simulations. These include studies of star-forming galaxies, Population III stars, massive black-hole formation, emission lines and the escape fraction of ionizing radiation.

As a NHFP Hubble Fellow at Harvard University, Barrow will create predictions and comparisons for upcoming observations from the Keck Observatory and the James Webb Space Telescope.

Issaoun is an observational astronomer who makes use of global networks of radio-telescopes to image and study the immediate surroundings of the supermassive black holes at the centers of our galaxy and the galaxy M87.

As an Einstein Fellow, Issaoun aims to expand millimeter-wave radio-imaging capabilities and forge strong connections between the first images of supermassive black hole shadows and physics probed by partner facilities across the electromagnetic spectrum.

Diana Powell — Sagan Fellow
Diana Powell grew up in Austin, Texas and received her undergraduate degree in astrophysics and physics from Harvard University. She moved to California for her graduate studies and will soon complete her PhD in astronomy and astrophysics at UC Santa Cruz where she works with Ruth Murray-Clay and Xi Zhang.

Powell’s research focuses on understanding planet formation and evolution through characterizing planetary atmospheres and the planet-forming material in protoplanetary disks. As a Sagan Fellow, Powell will continue her studies of exoplanet atmospheres and protoplanetary disks. She will also work to bridge these two sub-fields together to place new constraints on planet formation and evolution.