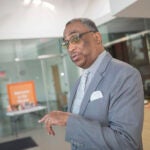 Black entrepreneurs in the spotlight

Walking down a dark alley, you might quicken your pace or even break out into a run — even if there is nothing there to harm you. Your instinct to flee is based on an ambiguous threat in your environment. But what part of your brain controls that response? How are those nebulous feelings relayed to your brain, and what compels you to run, or approach with caution?

Harvard researchers discovered a specific type of brain cell that modulates how mice respond to threats. The findings help us understand how the hippocampus processes information about the environment and relays it to “subcortical” regions of the brain, which ultimately modulate behavior.

“Threat sensors” are promising targets for future therapies that aim to change pathological responses to ambiguous threats, such as overgeneralization of fear in post-traumatic stress disorder.

The new research sheds some light on that dark-alley response. Published in Nature Neuroscience, the study reveals a specific population of neurons in mice that regulate behavior in situations the animals have learned to associate with unpleasantness. It also identifies some surprising fight-or-flight circuitry between the hippocampus and deeper structures in the brain, beyond the “thinking” structure of the cortex.

“What we really want to understand is how the brain guides behavior,” said Harvard Medical School’s Amar Sahay who led the study. “We know that the hippocampus encodes the details of episodic memories — our environmental context. It “gates” the activation of brain regions involved in flight or fear, and instructs these regions when they should come online. So when the hippocampus loses control of flight/fight/fear circuits, people experience dysregulation of fear and anxiety — as seen in many anxiety disorders and post-traumatic stress disorder.”

The findings point to a population of brain cells that could be a promising targets for the treatment of post-traumatic stress disorder.