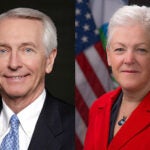 On March 3-4 at 8 p.m., the Fromm Players at Harvard assemble one of the nation’s foremost new music groups, Talea Ensemble, for two free concerts, “Songs Found in Dream,” in John Knowles Paine Concert Hall on the Harvard University campus.

The concerts, curated by Fanny P. Mason Professor of Music Hans Tutschku, showcase music written for Talea by some of the world’s leading composers. In addition, the concerts feature music, particularly Liza Lim’s work, that is at the heart of the Talea’s mission of presenting innovative musical experiences.

“Hopes and dreams have forever been sources of inspiration for artists of all genres,” says Tutschku. “When Alex Lipowski of Talea Ensemble and myself first discussed possible compositions for this year’s Fromm Players at Harvard concerts, we had not anticipated how poignant the subject would be in our current social and political situation: dreams and hopes not as an escape from reality but as inspiring spaces to celebrate uniqueness, individuality and vision.

Both concerts are free and open to the public. Free parking is available at the Broadway Garage, corner of Felton and Broadway streets in Cambridge. Paine Hall is located directly behind the Science Center at 3 Oxford St. and is wheelchair accessible. 617-495-2791 | musicdpt@fas.harvard.edu