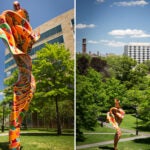 Harvard professor Susan A. Murphy was awarded this year’s Van Wijngaarden Award by the Centrum Wiskunde and Informatica.

Murphy won the honor for her work applying statistical methods to improving health care decision making. Her research focuses developing data analysis methods and experimental designs to improve real time multi-stage decision-making in mobile health. She led the development of a new type of sequential trial which is now deployed across many medical areas including treatment of various chronic diseases and addiction disorders.

Murphy is the the Mallinckrodt Professor of Statistics and of Computer Science and Radcliffe Alumnae Professor at the Radcliffe Institute. She is the former president of the Institute of Mathematical Statistics and the Bernoulli Society for Mathematical Statistics and Probability. Among her many honors, Murphy was inducted into the National Academy of Medicine in 2014 and into the National Academy of Sciences in 2016 for her distinguished and continuing achievements in original science. In 2013 she was awarded a MacArthur Fellowship for her work developing new methods that evaluate treatment courses for chronic conditions and that allow researchers to test the efficacy of adaptive interventions in clinical trials.

Murphy shares the prize with University of Oxford professor Marta Kwiatkowska. They will accept the prize in November.