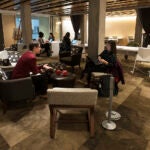 Wide cycle tracks that separate bicyclists from other traffic and bike parking facilities with security guards or cameras are among the factors that motivate college students in China to bicycle, according to a study from Harvard T.H. Chan School of Public Health and Peking University.

The study was published online Aug. 18, 2017 in the International Journal of Environmental Research and Public Health.

The idea for the study began when lead author Changzheng Yuan, Sc.D. ‘15, Sc.M. ‘12, now a postdoctoral research fellow in the Department of Nutrition at Harvard Chan School, was a master’s student and took the bicycle environments and public health class taught by Anne Lusk, research scientist and bicycle researcher in the Department of Nutrition. As part of the class, Lusk challenged students to develop and conduct surveys to find out what motivates people to take up cycling.

Yuan worked with Lusk to develop a survey and then contacted her friend Yangbo Sun, then a researcher at Yuan’s undergraduate alma mater Peking University and now a postdoctoral scholar at the University of Iowa. Yuan suggested they team up to survey students at Peking University, under the guidance of Yuan’s former advisor, co-author Jun Lv, a professor at the university. The researchers distributed the survey to students in six dormitories and collected completed questionnaires from 410 students.

While China for years had a system of wide cycle tracks designated just for bicycles, cyclists now must share many of these tracks with moving cars, parked cars, and bus stops. The authors found that the students considered cycle tracks dedicated just to bicycle traffic the safest way to travel on roadways. “Effective ways need to be provided to deter cars from driving and parking on the wide cycle tracks,” Yuan said. She and her colleagues suggested transportation officials consider adding a fence down the wide tracks to separate cyclists from other vehicles.

The poll showed the students preferred that bike parking sheds have painted lines to offer more space and order, similar to the lines marking spaces in parking lots. “Enhanced bike parking that lessens the risk of bike-on-bike damage would increase the number of bicyclists,” Yuan said.

How can we make biking safer and easier?  (Harvard Chan School’s “This Week in Health” podcast)