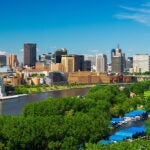 The study examined data from 96,000 participants in the Nurses’ Health Study II and found that women who consumed more than two sugar-sweetened beverages a day had more than double the risk of developing early-onset colorectal cancer when compared with women who drank less than one sugary drink a week.

According to the study, each eight-ounce sugary drink consumed per day was linked to a 16 percent higher risk of early-onset colorectal cancer. The researchers also found that the effects were particularly striking among teenagers who drank sugary beverages: Each daily serving consumed between ages 13 and 18 was associated with a 32 percent higher risk of early onset of the disease.

In a July 18, 2021, article in Prevention, lead author Jinhee Hur, a research fellow in the Department of Nutrition, suggested swapping sugary drinks for water, milk, or unsweetened coffee or tea. Hur also noted that eating less red and processed meat and minimizing alcohol consumption may help mitigate the risk of colorectal cancer.