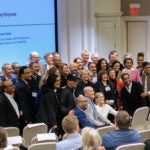 Researchers from SHINE and the Human Flourishing Program have published a new paper in Sustainability exploring whether the importance assigned to well-being domains may be associated with actual self-reported well-being in these same domains.

Looking at longitudinal data from 1,209 employees, they examined the associations between the perceived importance of six well-being domains (emotional health, physical health, meaning and purpose, social connectedness, character strengths, and financial stability) and subsequent well-being in these domains reported approximately one year later.  First authors Weziak-Bialowolska and Lee explain the significance of their findings in advancing our understanding of human flourishing and the important implications for sustainable growth.

In further explanation, Lee said, “Our main findings on the role of valuing well-being to achieve well-being are consistent with a ‘politics of being’ rather than a cultural emphasis on ‘having’ that is associated with resource-intensive economic systems rooted in environmentally degrading forms of consumerism. Interestingly, our research suggests that valuing character strengths and physical health is inversely associated with financial stability. However, we still need further research to explain the mechanism behind these associations.”