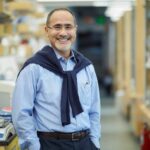 A range of issues relevant to health in both Thailand and the U.S. — including medical education, maternal health, hypertension and stroke risk, and the role of policy and persuasion in changing health behaviors — were discussed at a recent symposium aimed at promoting connections between the two countries in public health and medicine.

More than 70 attendees from the U.S. and Thailand attended the event, which was co-sponsored by the Harvard T.H. Chan School of Public Health, Harvard Medical School (HMS), the King of Thailand Birthplace Foundation, and the Thai Physicians Association of America (TPAA).

Cholthanee Koerojna, president of The King of Thailand Birthplace Foundation, opened the event and summarized the abundant connections between Thailand and Harvard University during the last century.

Joseph Brain, Cecil K. and Philip Drinker Professor of Environmental Physiology at the Harvard Chan School and a member of the event organizing committee, said the symposium’s attendance, especially the many who had travelled from Thailand, was a testament to Thai commitment to the legacy of Prince Mahidol Adulyadej and King Bhumibol Adulyadej.

Prince Mahidol of Songkla was one of the earliest alumni of the Harvard University and Massachusetts Institute of Technology School for Health Officers, which would become the Harvard Chan School; he received a Certificate of Public Health. He also received an M.D. from HMS. He left a career in the Siam Navy at 27 to study public health and medicine and to promote them in Thailand. While in the U.S., he negotiated an agreement with the Rockefeller Foundation to provide funding for education in medicine, nursing, and public health in Thailand. Upon his return, he served in the Ministry of Education and presided over substantial upgrades to science and medical facilities in Thailand’s universities.

“[Prince Mahidol] exemplified the model that we encourage,” said Michael Grusby, Executive Dean for Administration at Harvard Chan School, in welcome remarks. “We invite colleagues from everywhere on the planet to come to Boston, work with us, and then to return to their homeland to put in place what they have learned.”

Brain noted that the exchange of knowledge flows both ways. “Health indices in Thailand are very good, but accomplished at a much lower cost than in the United States. They have made a commitment to universal healthcare,” he said. “There are lessons to be learned for the United States.”

During a reception following the symposium, Mike McNally, vice dean for the Office of External Relations, announced the launch of a new Thai Scholars Fellowship Fund. The fund is intended to strengthen the relationship between the Harvard Chan School and Thai scholars by providing financial support to students for tuition and fees.

The symposium featured more than 20 speakers, including many experts from Thailand,  HMS’ Edward Hundert, and Harvard Chan’s Nancy Long Sieber and Edward Nardell.