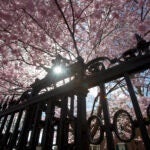 The award recognizes the best doctoral dissertation of the year from entries submitted by scholars’ doctoral advisors or mentors. Cross completed her dissertation, “The Color, Class, and Context of Family Structure and Its Association with Children’s Educational Performance” in 2019 at the University of Michigan.

Cross’s recent research critically examined the long-held assumption that a two-parent household is key to children’s educational success and wellbeing. In a paper published in the Journal of Marriage and Family, Cross found that the reality was more complex, and that minority children living outside of a two-parent family structure did not have worse outcomes than white children in similar situations.

In the Harvard Gazette last fall, Cross explained her findings, stating that children who live outside of a two-parent family model tend to fare worse than those living with two parents, minority children appeared to be less adversely affected by their situations. This was in part due to existing economic disparities between white and minority earners. In the case of Black and Hispanic families, for example, Cross found that “even when they live in a two-parent family, they’re still two to three times more likely to be poor,” which affects all aspects of wellbeing.

Cross will join the sociology department as an assistant professor in 2021.