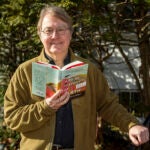 The American Association for the Advancement of Science (AAAS), the world’s largest general scientific society, selected 564 members as Fellows of AAAS, which  honors members whose efforts on behalf of the advancement of science or its applications in service to society have distinguished them among their peers and colleagues.

“AAAS is proud to honor these individuals who represent the kind of forward thinking the scientific enterprise needs, while also inspiring hope for what can be achieved in the future,” said Sudip S. Parikh, AAAS chief executive officer and executive publisher of the Science family of journals.

The 2021 class of AAAS Fellows includes scientists, engineers, and innovators from around the world spanning scientific disciplines. They bring a broad diversity of perspectives, innovation, curiosity, and passion that will help sustain the scientific field today and into the future. Many of these individuals have broken barriers to achieve successes in their given disciplines.

The following six members were selected from the Harvard community:

The new Fellows will be celebrated later this year during an in-person gathering.