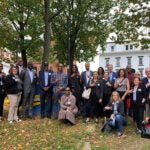 Seven scientists and engineers are joining the Harvard Computer Science faculty, bringing expertise in a range of areas including emerging frontiers of artificial intelligence, machine learning, quantum engineering and data science. The additions will strengthen and diversify research, teaching, and scholarship in Harvard’s highly interdisciplinary program.

The new faculty will have appointments in the Harvard John A. Paulson School of Engineering and Applied Sciences (SEAS). The offices and labs of SEAS computer scientists are housed in Harvard’s newly opened Science and Engineering Complex, a state-of-the-art centerpiece of the University’s Allston campus and regional innovation cluster.

Sham Kakade, an expert in statistical machine learning, will join Harvard in January as the Gordon McKay Professor of Computer Science. Kakade, who helped lay the statistical framework for reinforcement learning and introduced tensor methods for latent structure discovery, explores the mathematical foundations of machine learning and AI. His work spans economics, neuroscience, and applied and theoretical machine learning. Kakade is currently a professor of computer science and statistics at the University of Washington and Senior Principal Researcher at Microsoft Research. He received his Ph.D. at the Gatsby Computational Neuroscience Unit, University College London, and his B.S. in physics at Caltech.

Also accepting appointments to the Harvard Computer Science faculty are:

Anurag Anshu, assistant professor of computer science, whose work explores the complexity of quantum many-body systems through the lens of quantum complexity theory and quantum information theory. At Harvard, Anshu will engage in research and teaching in quantum computing, particularly with the University’s recently launched Ph.D. program in Quantum Science and Engineering. Currently a postdoctoral researcher at the University of California, Berkeley, he earned his Ph.D. from the Centre for Quantum Technologies, National University of Singapore, and bachelor’s degree in computer science from the Indian Institute of Technology, Guwahati.

David Alvarez-Melis will join SEAS as assistant professor of computer science and applied mathematics from Microsoft Research New England, where he is a senior researcher in the machine learning and statistics group. His research draws on ideas from statistics, optimization, and applied mathematics to make machine learning more trustworthy and more broadly relevant to data-limited applications, particularly those arising in the natural and medical sciences. He received his Ph.D. in computer science from MIT, bachelor’s from ITAM in Mexico City and master’s from New York University’s Courant Institute, both in mathematics.

Jonathan Frankle, assistant professor of computer science, develops experimental methods for understanding the behavior of neural networks. He is a cofounder of a startup based on his work. Frankle, who earned his Ph.D. in machine learning from MIT, and bachelor’s and master’s in computer science from Princeton, is also actively involved in technology policy and spent a year working at the Georgetown University Law Center in this capacity.