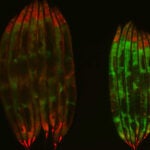 Road trip! This fall, four researchers from Harvard T.H. Chan School of Public Health and Massachusetts General Hospital in Boston hopped into a 32-foot-long RV and began motoring down the East Coast in order to meet with 51 participants from the Nurses’ Health Studies and Health Professionals Follow-Up Study. Their aim was to conduct neurological examinations that will help them learn more about the early symptoms of Parkinson’s disease.

The subjects are among the thousands of health professionals who have dutifully been filling out questionnaires about their health and habits for decades, providing data that has formed the basis of numerous research studies on risk factors for chronic diseases.

“The participants feel like they are part of our work after participating for so long, so meeting in person was exciting for us and for them,” said Alberto Ascherio, professor of epidemiology and nutrition at Harvard Chan School. Ascherio was joined by neurologist Michael Schwarzschild of Harvard Medical School and Massachusetts General Hospital, and Schwarzschild’s research fellows Jessica Baker and Christopher Stephen.

The team met with study participants who had completed questionnaires on their sense of smell and color vision—the loss of either of which may be an early symptom of Parkinson’s disease. Participants were chosen to represent a range of scores on the tests, with some having already received a Parkinson’s diagnosis, and others serving as healthy controls. The team spent an hour with each individual, conducting in-depth tests.