Saving democracy is too important to leave ‘to nerds like me’ 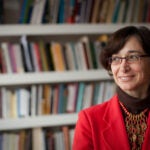 Julia Minson, a decision scientist at Harvard Kennedy School, has built her scholarly career on studying ways to reduce conflict between people who disagree with each other. She worries that partisan conflict now poses a growing threat to political life in the United States and beyond.

That’s why Minson, an associate professor of public policy, was in a virtual room recently with hundreds of other social scientists and practitioners similarly interested in ways to reduce partisan animosity. Some of them were authors of the more than 250 proposals submitted to Stanford University’s Strengthening Democracy Challenge — a competition to select the most promising democracy-strengthening ideas and then test them with a pool of 32,000 participants.

The submission from Minson and three researchers from Bowdoin College — Daniel Stone, David Francis, and Michael Franz — came in first; it scored the greatest impact in reducing partisan animosity among the 25 finalists. Their idea wasn’t some intricate peer-reviewed academic experiment. Rather, it relied on a feel-good beer commercial.

And for Minson, that carried a lesson.

“Let’s try to sell democracy,” she told the Stanford conference. She challenged the academics to take some of the animosity-reducing experiments submitted to the Stanford competition “and figure out how we can make them into commercials and into Hollywood blockbusters and into viral memes and into really popular video games, right?”