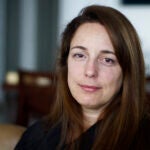 A team of researchers have discovered a “layer Hall effect” in a 2D topological Axion antiferromagnet.

The work, published in the journal Nature, is believed to be the first experimental evidence of this type of quantum state and can one day help generate a magneto-electric effect that can lead to the next-generation of electronic devices, sensors, detectors and memory devices that use magnetic strips, such as credit cards.

“The Axion insulator is a new quantum state with truly exciting quantum properties.” said Suyang Xu, an assistant professor of chemistry at Harvard and a lead author of the report. “For a long time, researchers have been searching for materials that can realize this state. Finally, we have found a good one!”

The new study — completed by researchers from Harvard and other universities in the U.S. and abroad — focuses on weakly-interacting particles called axions. Postulated by theorists more than 30 years ago, they are one of the primary candidates for the Dark Matter, a mysterious form of matter thought to account for about 85 percent of the universe. The researchers created an experimental platform called the topological Axion insulator that would allow them to study the behavior of Axion particles and their mysterious properties. It was recently proposed that the axions could be realized as quasi-particles in solid state materials such as quantum topological Axion insulators.

The researchers designed quantum device made of manganese bismuth telluride (MnBi2Te4). The material was layered into a two-dimensional crystal structure.

“We used advanced fabrication to thin the material down into only a few nanometer and make it into some sort of quantum device. Then we measured the electronic behavior at very low temperatures,” said Xu.

The researchers found what they coined as the layer Hall effect, in which electrons from the top and bottom layers spontaneously defect in opposite directions without an applied magnetic force. In a standard Hall effect, it is a magnetic force that brings on the movement of the electrons in the system while here it is due to the inherent topology of the materials.

The researchers believe this layer Hall effect signals a topological Axion insulating state and can be controlled by applying both an electric field and a magnetic field — a force known as an Axion field. They plan on studying the dynamics of the system further and pinpointing the magneto-electric effect that can lead to technological leaps.

“Our next goal is to directly demonstrate the quantized magneto-electric effect, which can be utilized to realize next generation memories that are extremely robust, precise and ultrafast,” said Xu.