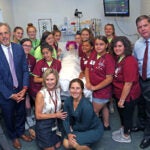 Professor of Astronomy Daniel Eisenstein leads one of nearly two dozen groups who have been granted access to the world’s fastest supercomputer to conduct research.

Known as Summit, the massive system is located at the Oak Ridge Leadership Computing Facility (OLCF), and is capable of reaching speeds as high as 200 petaflops, or 200 quadrillion operations per second.

To understand what that means in terms of computing power, imagine 6.3 billion people making one calculation a second, every second, for an entire year.

Eisenstein and his group received 300,000 node hours to put that power to work to create large-scale simulations of the structure of the Universe, which astrophysicists can use to compare current cosmological theories to data that will come from the next generation of galaxy redshift surveys.

Among those surveys is the soon-to-begin Dark Energy Spectroscopic Instrument (DESI) collaboration, which survey over 30 million galaxies to map the distribution of galaxies over regions billions of light-years across.

The maps generated by such surveys, Eisenstein said, show clustering patterns that have grown by the force of gravity from small density fluctuations in the early Universe. The computer-generated simulations can track that process, starting from the fluctuations in different cosmological theories and demonstrated how they lead to the distribution of matter in response to the large-scale gravitational forces.

“The award of this computer time is very exciting for us,” Eisenstein said. “We have been developing this code base for nearly a decade, using custom-built local computers to provide the particular mixture of hardware features that we needed to optimize its performance. It turns out that this flagship computer has exactly the feature mix we need and comes at a time well-suited to the schedule of the DESI survey. It’s very gratifying to see this long-term student-based project come to fruition.”