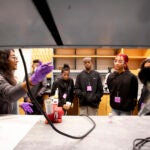 In health, place matters. That’s why Harvard T.H. Chan School of Public Health’s Nancy Krieger and colleagues have updated and broadened a project aimed at training people in how to track and monitor socially related disparities having to do with where a person lives.

Over the summer, Krieger, professor of social epidemiology, spearheaded an effort called the Public Health Disparities Geocoding Project 2.0 that offered virtual training to 150 health professionals and academics in how to effectively use area-based social metrics (ABSMs) to monitor and analyze population health and health inequities. Geocoding creates numerical codes for particular areas to highlight how the social features of these areas, including socioeconomic resources and racialized segregation may be linked with health disparities. Based on the updated training, Krieger and colleagues released an online interactive training manual in late October, free for all.

Researchers have known for decades that a person’s socioeconomic resources, including where they live, along with exposure to residential and occupational segregation, significantly impacts their risk for a whole host of medical conditions, including heart disease, diabetes, HIV, and cancer, said Krieger. “There are many ways that socioeconomic conditions and segregation affect health,” she said. “People with fewer resources could lack income to access nutritious healthy food, work in unsafe jobs, or live in neighborhoods with poor air quality.”

Public health officials, however, often lack the ability to track and monitor these sorts of disparities. “What they do almost inevitably have, however, is an address,” said Krieger, who has worked since her graduate student days in the 1980s to figure out how to use that geographic data to help community members and public health workers identify and reduce inequities among those most at risk for adverse health exposures and outcomes.

Krieger launched the first Public Health Disparities Geocoding Project in the late 1990s. Using administrative records from the Massachusetts and Rhode Island health departments, she and colleagues determined that the geographical level most likely to produce the best data to measure health outcomes was the census tract, and the most robust ABSM was percentage of people below poverty.

In 2004, the project released a manual on its geocoding methodology and conducted a training on how to use it effectively and avoid common pitfalls.

In recent years, more advanced methods have been developed to track racialized economic segregation, so Krieger worked on another update along with her colleagues Pamela Waterman, project director for the geocoding project; Jarvis Chen, lecturer on social and behavioral sciences, Christian Testa, a statistical analyst; Dena Javadi and Justin Morgan, doctoral students in the Department of Social and Behavioral Sciences; and Enjoli Hall, a doctoral student in MIT’s program on urban planning.

The team held two four-day training sessions in summer 2022 that included lectures by Krieger, Chen, Testa, and the doctoral students, as well as five case studies. Project members hope that scores of researchers, health agencies, community-based groups, and advocates will use the project’s geographically based techniques to advance health equity across the U.S.