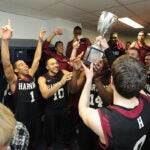 Preet Bharara, U.S. attorney for the Southern District of New York, and Mindy Kaling, actress, comedian, and writer, were selected as this year’s speakers for the Class Day ceremonies at Harvard Law School. Class Day will take place on Wednesday, May 28, 2014.

Bharara, who has served as the U.S. attorney for the Southern District of New York since 2009, is known for leading his office’s prosecutions against insider trading, international terrorism, and public corruption. His office has successfully extradited and prosecuted arms trafficker Viktor Bout, and obtained life sentences for Faisal Shahzad, the Times Square bomber, and for one of the Al Qaeda plotters of the 1998 bombings of two American embassies in East Africa.

Kaling, who is best known for her award-winning work in the television series “The Office,” is the creator, producer, and star of “The Mindy Project,” which is currently in its second season on Fox Network. She is also the author of a best-selling memoir, “Is Everyone Hanging Out Without Me? (And Other Concerns).”

A native of Cambridge, Mass., Kaling graduated from Dartmouth College in 2001. During college, she created the comic strip “Badly Drawn Girl,” which was published in the Dartmouth newspaper. She was part of the improvisational comedy troupe “The Dog Day Players” and an a cappella group, “The Rockapellas.” She co-wrote and starred in the play “Matt+Ben,” which went on to make Time Magazine’s “Top Ten Theatrical Events of the Year” in 2003.