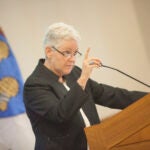 Professor Alina Payne, director of Villa I Tatti, The Harvard University Center for Italian Renaissance Studies, is pleased to announce that the I Tatti Mongan Prize has been awarded to Professor Miguel Falomir, director of the Museo Nacional del Prado. Professor Falomir will deliver his Laureate Lecture in Florence, Italy on May 10, 2018.

The I Tatti Mongan Prize is given to a distinguished scholar of Renaissance art or connoisseurship who carries into a new generation the qualities of imaginative scholarship, personal generosity, and devotion to the institutions of art history that were exemplified in their own generation by Agnes and Elizabeth Mongan. Founded by a gift from Melvin Seiden, the prize was first conferred in 1988 on Sydney Freedberg, and successively on Craig Hugh Smyth (1992), Sir Ernst Gombrich (1996), Caroline Elam (2003), Paola Barocchi (2006), Elizabeth Cropper (2011), Hans Belting (2013), and Marvin Trachtenberg (2016).

“After 20 years as curator of Italian Renaissance painting, I am very pleased to be awarded with the I Tatti Mongan Prize,” said Falomir. “I understand this award as a recognition of the profound transformation of the Museo del Prado in these two decades.”

Miguel Falomir Faus has been the Director of the Museo del Prado since March 2017. Before, he was Head Curator in the Prado’s Department of Italian Renaissance Painting from 1997 to 2015 and the Prado’s Deputy Director responsible for Conservation and Research from 2015 to 2017. He has curated, among others, exhibitions on “Titian” (2003), “Tintoretto” (2007), “The Renaissance Portrait” (2008) and “The Furies: Political Allegory and Artistic Challenge” (2014). Miguel Falomir holds a Ph.D. in the History of Art from the Universidad de Valencia, where he has been a full professor of art history since 1996. In 2008 to 2010 he was the Andrew Mellon Professor at the National Gallery of Art’s Center for Advanced Study in the Visual Arts in Washington, D.C., and is the author of numerous publications that have appeared in both Europe and the United States.

“It was particularly important to us this year that the prize should honor outstanding curatorial achievement,” said Payne. “Such achievement characterized the lives of Agnes and Elizabeth Mongan, and it has also characterized Professor Falomir’s life and work as one of the Spanish-speaking world’s leading scholars and curators.”

The Prize will be presented at Villa I Tatti in Florence, Italy on May 10 at 6 p.m. On this occasion, Professor Falomir will deliver a Laureate Lecture on Berenson and Titian. The Lecture is open to the public and free of charge. Please register through the I Tatti website.