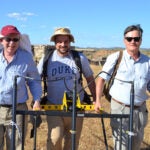 Pepperberg, who received a Ph.D. in chemical physics in 1976 and a master’s degree in chemistry in 1971 from Harvard, is an expert in the study of African Grey parrots with a focus on the birds’ cognitive and communicative abilities. Her research explores these behaviors in comparison to those of young children, apes, and marine mammals.

Recently, Pepperberg and a group of Harvard cognitive psychologists published a study in the journal Behaviour on parrots’ ability to perform some cognitive tasks beyond the level of 5-year-old humans. She has received numerous awards for her research and teaching, including a John Simon Guggenheim Fellowship, a MUSE Award from the American Alliances of Museums, and a Christopher Award for her book “Alex & Me.” She is a fellow of the Animal Behavior Society, the American Psychological Association, and the American Association for the Advancement of Science, among others.

Pepperberg also created The Alex Foundation, dedicated to supporting research that enhances and expands knowledge about the abilities of parrots, and the conservation and preservation of parrots in the wild. Suzanne Gray A.L.B. ’15 is the senior manager of the laboratory, which is housed at the Pepperberg Avian Cognition Lab at Harvard.

The CCS was founded in 1999 to expanding understanding of the nature and evolution of cognition in human and nonhuman animals. The CCS Research Award is presented to scientists whose work has made a significant contribution to the field of animal cognition research.