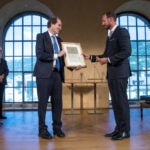 Gökhan Hotamisligil is on a mission to help us survive our affluence and its attendant cardiometabolic diseases. His prolific laboratory at the Harvard T.H. Chan School of Public Health and Sabri Ülker Center for Nutrient, Genetic, and Metabolic Research has recently generated another line of inquiry that could lead to treatments or prevention strategies for heart disease, stroke, and other disorders.

Led by postdoctoral fellow Scott Widenmaier, the team has found a “molecular guardian,” as Hotamisligil has dubbed it, which senses the toxic buildup of cholesterol within cells and triggers powerful protective responses.

The research, published last November in Cell, represents a natural outgrowth of studies that Hotamisligil has conducted for more than 25 years on metabolism, nutrition, obesity, and the immune system. A decade ago, this line of inquiry led him to the endoplasmic reticulum, a distribution center within cells where proteins are processed, stored, and packaged for delivery to their ultimate cellular destinations.

“We made a series of discoveries which told us that the endoplasmic reticulum may have a much bigger function in the cell, especially on metabolic health, and operate almost like an environmental surveillance device,” says Hotamisligil, who is chair of the Department of Genetics and Complex Diseases, the J.S. Simmons Professor of Genetics and Metabolism, and director of the Sabri Ülker Center.

Hotamisligil’s discoveries have shed light on the molecular basis of obesity, diabetes, and other cardiometabolic disorders, as well as age-associated pathologies such as neurodegeneration. As he and his colleagues uncovered the role of the endoplasmic reticulum in protecting cells from shortages or surpluses of certain molecules, the researchers turned their attention to cholesterol. “One thing which dawned on us was a huge gap in the understanding of cholesterol homeostasis,” says Hotamisligil.

For all the bad press it gets, cholesterol is one of the most important molecules in the body, comprising 25 to 30 percent of our cell membranes and helping give them the perfect balance of stability and flexibility that animal cells need. But since evolution is a resourceful tinkerer, plentiful molecular actors like cholesterol have been drafted for many roles: hormone and vitamin production, digestion, signaling, and others. While most cells in the body can generate some cholesterol, the main source is the liver, and to a smaller extent, cholesterol-containing foods. With so much riding on cholesterol, the body has mechanisms to ensure that there is enough, including a sensor in the membrane of the endoplasmic reticulum called SREBP2, a protein that signals any need to boost cholesterol synthesis.