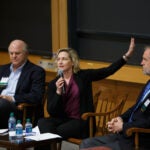 Lowering drug prices, cutting the federal budget deficit, and stanching the rise of domestic hate crimes are among the top issues that Americans want Congress to tackle in 2019, according to a new poll conducted by Harvard T.H. Chan School of Public Health and Politico.

The poll surveyed 1,014 adults in early December, and found a shift in priorities among respondents compared with similar polls that were conducted ahead of the November 2018 congressional elections, when protecting insurance for pre-existing conditions and fighting terrorism ranked high.

“The top two issues were not top two issues in the election,” said Robert Blendon, Richard L. Menschel Professor of Public Health and Professor of Health Policy and Political Analysis, said in a Jan. 3, 2019 Politico article. “You’ve had a shift from what really drove voters to a somewhat different agenda.”

Responses to other issues fell along party lines. For example, nearly 9 in 10 Democrats said efforts aimed at addressing the effects of climate change are extremely important while only one-third of Republicans agreed. There was broad support for lowering the federal deficit, the poll showed, but Republicans were slightly more in favor of doing so.