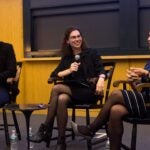 Multiple micronutrient (MMN) supplements given to pregnant women reduced deaths among female newborns and provided better birth outcomes than iron and folic acid supplements alone, especially among anemic and undernourished women, according to a new study from Harvard T.H. Chan School of Public Health researchers and colleagues. They found no evidence to support concerns that MMN supplements pose health risks for pregnant women.

The findings suggest that antenatal care guidelines released last year by the World Health Organization (WHO), which expressed reservations about the use of MMN supplements in low- and middle-income countries, should be reconsidered, said first author Emily Smith, who did the research as a postdoctoral research fellow in the Department of Global Health and Population and is now a program officer at the Bill & Melinda Gates Foundation. “This paper fills an evidence gap that may have prevented national and global policy adoption and scale-up of this intervention. We hope this research leads to re-examination of global and national guidelines for antenatal care.”

It’s common for women in low- and middle-income countries to be anemic … and they may also be low in vitamins A, D, E, zinc, and calcium. This is mainly due to diets that are poor in fruits, vegetables, and protein. These deficiencies are often worsened by pregnancy, and they can lead to babies born with low birthweight and other health problems.

The new study…looked at data from 112,953 pregnant women who were participants in 17 randomized controlled trials done in 14 low- and middle-income countries. The studies compared MMN supplements containing iron-folic acid to supplements with iron-folic acid alone.

The findings showed that MMN supplements provided significantly greater reductions in the deaths of newborn girls than iron-folic acid supplementation alone. Boys did not show similar improvement, for reasons that may be due to differences in causes and timing of deaths by infant sex, according to the researchers. Multiple micronutrient supplementation also reduced the risk to babies of both sexes of being born preterm or with low birth weight. The researchers did not see any evidence that MMN supplements increased the risk of stillbirth and infant mortality, concerns expressed in the WHO guidelines and by other researchers.

“MMN is just one part of ensuring a positive pregnancy experience and healthy growth and development for all infants,” Smith said. “But it’s something that can be done right now as policy makers and health care providers strive for the best outcomes for women and children.”

“Antenatal multiple micronutrient supplementation is not a ‘silver bullet’ to improve maternal and infant health, but should be considered as an additional tool for more comprehensive and equitable prenatal care in resource-limited settings,” said senior author Christopher Sudfeld , assistant professor of global health and nutrition.