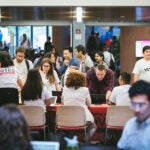 Tarana Burke, civil rights activist and founder of the global #MeToo movement for survivors of sexual assault, has been chosen as this year’s recipient of Harvard Kennedy School’s Center for Public Leadership Gleitsman Award. The annual award honors Burke for her leadership of the global fight for survivor justice and her decades-long campaign to heal individuals and communities affected by sexual violence.

“Tarana’s work is visceral and fearless. In bringing attention to systemic failings and individual acts of courage and organizational support, Tarana has created a groundbreaking campaign that’s shaped our media and policy worlds in a truly profound way,” said Wendy R. Sherman, professor of the practice of public leadership and director of the Center for Public Leadership at Harvard Kennedy School. “She reminds us that there is indeed a lot of work to be done in our own communities, including Harvard. But with #MeToo she has fundamentally changed the conversation at institutions and in households around the world.”

The Gleitsman Award and $125,000 prize are given annually by the Center for Public Leadership to an individual or team whose leadership in social action has improved the quality of life in the United States and across the globe. Previous Gleitsman recipients include Malala Yousafzai, U.S. Representative John Lewis, Nelson Mandela, and Gloria Steinem.

The award will be presented to Burke at a public event at Harvard Kennedy School on Wednesday (Feb. 26). In addition to the public award ceremony, Boston community organizations and Harvard students and faculty will come together for a day of resource-sharing.

“Accepting the 2019 Gleitsman Citizen Activist Award fills me with so much gratitude and humility,” said Burke. “It is an absolute honor to be in the company of such monumental changemakers who would be doing the work of justice, regardless of recognition and acclaim. I speak for all sexual assault survivor leaders when I say that we share that same fire. I dedicate this award to them, and I thank those who nominated and selected me for this esteemed recognition.”