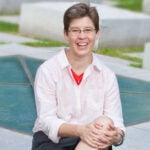 Catherine Dulac, Higgins Professor in the Department of Molecular and Cellular Biology and an investigator at the Howard Hughes Medical Institute, is the winner of the 2017 Edward M. Scolnick Prize in Neuroscience. She was awarded the prize for her contributions to the understanding of how pheromones control brain function and behavior and the characterization of neuronal circuits underlying sex-specific behaviors.

The Scolnick Prize is awarded annually by the McGovern Institute for Brain Research at MIT to recognize outstanding advances in any field of neuroscience.

Dulac is best known for her discovery of pheromone receptors and downstream brain circuits controlling sex-specific behaviors. Dulac has also studied genomic imprinting, an epigenetic phenomenon by which certain genes are differentially expressed depending on whether they were inherited from the mother or the father. Dulac’s work has revealed that imprinting of brain genes is much more common than previously realized, with important implications for basic biology and for the epidemiology of brain disorders.

The McGovern Institute will award the Scolnick Prize to Dr. Dulac on March 13. At 4:00 p.m. she will deliver a free, public lecture entitled “The Neurobiology of Social Behavior Circuits” at the McGovern Institute in the Brain and Cognitive Sciences Complex, 43 Vassar Street (building 46, room 3002) in Cambridge.