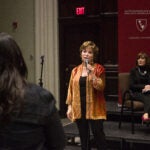 At the Askwith Forums on Nov. 14, several cities’ mayors will share how — with Harvard Graduate School of Education’s By All Means Initiative and Harvard Kennedy School’s Bloomberg City Leadership Initiative — they are mapping out cradle-to-career pathways to success for children in their communities.

In an era of widespread disagreement on education reform, increased confidence in local control of education, and the absence of a dominant theory on where reform goes from here, visionary mayors are emerging as leaders of thought and action in defining a new role for municipalities to play in developing and educating young people, with particular attention to children living in poverty.

“Cities need more family and community-based services: supports and opportunities to address the most basic needs like food and shelter, and more complex provisions such as access to opportunities for out of school learning and enrichment. This system overhaul will require customization, a personalized system of supports and opportunities that mimics the massive social capital enjoyed by children of affluent families,” wrote HGSE Professor Paul Reville in a recent Washington Post op-ed. “Mayors, new-and-old, are best positioned to build these new systems and become the face of this growing ‘new localism’ in education and human capital development.”

Reville, director of the Education Redesign Lab (ERL) and former Massachusetts secretary of education under former governor Deval Patrick, will introduce and Harvard Kennedy School Professor Jorrit de Jong, director of the Bloomberg City Leadership Initiative (BCLI), who will moderate a discussion with four mayors — Joseph Curtatone of Somerville, Massachusetts; Jorge Elorza of Providence, Rhode Island; Greg Fischer of Louisville, Kentucky; and Libby Schaaf of Oakland, California — about how they are creating policies and programs that promote education in their communities in collaboration with ERL’s By All Means Initiative and BCLI.

Launched in 2016, the Education Redesign Lab at the Harvard Graduate School of Education runs the By All Means Initiative. By All Means works with six mayors across the country including Curtatone, Elorza, Fischer, and Schaaf on how to improve public services for children. As stated in their website, several main issues in child educational systems are being tackled by By All Means:

“What can be done to create new systems of education and support to help disadvantaged students overcome the obstacles of poverty?

Who must come together to do the work?

What systems of governance are best suited to the new system?

How do we build systems of education that genuinely prepare all children to be successful?”
The Bloomberg Harvard City Initiative is run by the Harvard Kennedy School and designed to help senior leaders develop new techniques and strategies to manage issues faced in their cities. Resources and services provided include online courses, student internships, and executive education.
For more information: https://www.gse.harvard.edu/calendar?trumbaEmbed=view%3devent%26eventid%3d125521595