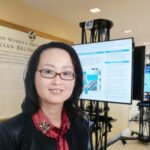 The Family Van, a mobile health clinic affiliated with Harvard Medical School, recently welcomed Massachusetts Secretary of Health and Human Services Marylou Sudders during its weekly visit to Codman Square in the Dorchester neighborhood of Boston.

Founded nearly three decades ago, the Family Van offers free health screenings, such as blood pressure, diabetes, HIV, pregnancy and more, in several of Boston’s underserved neighborhoods. It also offers referrals and health and wellness counseling. No ID and no health insurance is required.

Secretary Sudders, who toured the space, met with staff, volunteers and patients, praised the role the Family Van plays in the community, calling it a “medical safety net,” particularly for its role in connecting individuals without insurance coverage to public programs such as MassHealth.

Last year, the Family Van provided care to Boston residents during more than 3,100 visits in Roxbury, East Boston, and Dorchester. Eighty-four percent of patients were either uninsured or on public insurance. Over the past five years, the program has saved an estimated $2.8 million in avoided emergency room costs.

More information about various services, locations, and schedules can be found at www.familyvan.org, facebook.com/familyvan, or @TheFamilyVan on Twitter.