Making cities bike friendly for all 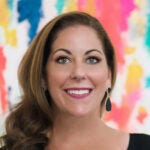 Across the U.S., bicycling rates are on the rise among low-income residents and people of color. But cycling infrastructure in cities, such as dedicated bike lanes, are often lacking in low-income or minority neighborhoods, and riders there a face higher risk of accidents and crashes. A new study from Harvard T.H. Chan School of Public Health offers insight into what kinds of bike infrastructure residents of such neighborhoods believe would best meet their needs.

Led by Anne Lusk, research scientist in the Department of Nutrition, researchers asked more than 200 lower-income, predominantly-minority residents of Boston about what sorts of bike-route surfaces or contexts they perceive as safest from crime and crashes. The study found that residents would prefer networks of wide, stenciled, red-painted bicycle-only lanes along main streets that are well-lit and protected by barriers.

“This would help residents get to work affordably, quickly, and safely, and improve public health and quality of life in communities where these benefits are most needed,” Lusk wrote in a Feb. 8, 2019 article in The Conversation.