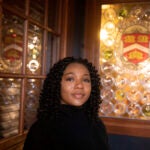 Nicolae was recognized for her thesis, “The Effects of Liquidity Regulation on Bank Demand for Reserves and the Federal Reserve’s Balance Sheet Policy.” She is a senior at Harvard College and is graduating this month with an A.B. in applied math and economics.

The John T. Dunlop Thesis Prize in Business and Government is awarded to graduating seniors who write the best thesis on a challenging public policy issue at the interface of business and government. Each prize carries a $1,000 award.

This year’s winning thesis by Nicolae examines the effect of the Liquidity Coverage Ratio (LCR) — the first standardized minimum liquidity requirement for large U.S. banks — on banks’ reserve demand. Her research results imply that the LCR partly explains the Fed’s reduced control of interest rates but does not explain the majority of the increase in banks’ reserve demand since the financial crisis.

In explaining why the center chose to award the John Dunlop Prize to Nicolae this year, John A. Haigh, co-director of M-RCBG, said that her “thesis is of significant interest to the Mossavar-Rahmani Center for Business and Government. It is ambitious and well-executed, and the results are robust and important for policy…our review committee was impressed with the sophistication of her analysis.”

John T. Dunlop, the Lamont University Professor Emeritus, was a widely respected labor economist who served as dean of the Faculty of Arts and Sciences from 1969 to 1973. An adviser to many U.S. presidents, beginning with Franklin D. Roosevelt, Dunlop was secretary of labor under Gerald Ford, serving from March 1975 to January 1976.

In addition to serving as secretary of labor, Dunlop held many other government posts, including: director of the Cost of Living Council, (1973-74), chairman of the Construction Industry Stabilization Committee (1993-95), chair of the Massachusetts Joint Labor Management Committee for Municipal Police and Firefighters (1977-2003) and Chair of the Commission on Migratory Farm Labor (1984-2003).