Looking back on a lifetime of learning 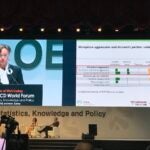 Edgar Grossman ’66, a man who had a pivotal role in establishing the roots of the Harvard Extension Alumni Association community, comprised of 20,000 members worldwide, was honored at a special ceremony inside the Harvard Faculty Club this weekend. A cold Saturday in December was no match for the warmth and festivities taking place inside the East Dining Room during the annual Holly Reception, the year-end gathering for the Harvard Extension Alumni Association. As the finale of the HEAA’s year-long 50th anniversary celebration, the organization honored the contributions of Edgar Grossman, and his family at the event. Harvard Extension School alumni, representing every decade since the 1960s, gathered to share in the vision of a man who valued education as an integral part of one’s path in life.

Addressing the crowd at the event, Huntington D. Lambert, dean of Harvard Continuing Education and Extension School, noted Grossman’s impact at Harvard Extension School. “Edgar knew, and I’m sure many of you will agree, that our students never stop learning,” Lambert said. “Edgar and his family’s generosity towards our students, Harvard Extension, and the University are sewn into the fabric of our mission of helping adult learners to grow and achieve success throughout the arc of their learning life.”

The Holly Reception, a revived tradition dating back to the late 1960s, originated as a welcoming, non-religious holiday celebration that fostered and strengthened the lifelong bonds of Harvard Extension’s earliest graduates. Over 100 alumni from all over the country gathered at the Harvard Faculty Club, adorned in its holiday best, to give a rousing cheer to the next 50 years.

“The value of our Harvard Extension education, lies in our ability to understand how those who came before us dealt effectively and with a sense of urgency, with the problems, issues, and unmet needs of society that faced them in their own lifetime.”
— Edgar Grossman

The story of Grossman’s path to Harvard Extension is not unlike those of today’s current Harvard Extension School students.  He graduated high school in 1936 but, because of life circumstance, did not immediately attend college. According to Grossman’s son Steven, Grossman pleaded with his father to enter the family business and work for a living. He contended that he was “not a learner” and that college was not for him. His father, Max, who immigrated to the United States in 1900 and never made it past the sixth grade, told his son “Edgar, I didn’t come all this way, work all these years to have you go into business with me and not get a college degree.”

Grossman eventually attended Harvard but not before serving his country as a lieutenant colonel in the U.S. Army Reserves during World War II and traveling all over Europe with his wife.

After getting his bachelor’s degree from Harvard Extension, Grossman received a master’s degree in counseling psychology from Boston College. He also served as a part-time counselor and staff psychologist at Harvard University and Boston College from 1966 to 1973.

Grossman was awarded the Harvard Medal by President Derek Bok in 1990, recognizing him for his role in the founding of the HEAA and serving as its first president.

Grossman’s influence continued at the Extension School long after his tenure as HEAA president ended. A year after receiving the Harvard Medal, the Grossman Common Room was dedicated at Harvard Extension School’s main building.

Steven recalled a quote from his father that he felt exemplified Grossman’s vision on lifelong learning. “The value of our Harvard Extension education,” said Grossman, “lies in our ability to understand how those who came before us dealt effectively and with a sense of urgency, with the problems, issues, and unmet needs of society that faced them in their own lifetime.”