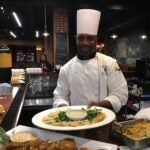 Putting plants at the center of the plate

Adolescents who get insufficient and poor quality sleep are more likely than well-rested kids to have higher blood pressure, bigger waistlines, and lower levels of HDL, or “good” cholesterol — risk factors that can set them up for cardiovascular disease as adults, according to a recent study led by Elsie Tavares, professor in the Department of Nutrition at Harvard T.H. Chan School of Public Health.

Tracking 829 adolescents in the Project Viva study, the researchers found that only 2 percent met or exceeded the minimum sleep recommendations for their age (at least 9 hours for pre-teens and 8-10 for teens). Most participants slept for less than 7½ hours each night. More than half showed poor sleep efficiency; good sleep efficiency is defined as falling asleep within 30 minutes of going to bed, and waking for no more than 20 minutes during the night.

The study was published June 15 in Pediatrics.

In a June 19 post on the NIH Director’s Blog, Francis Collins wrote that “the findings suggest a lack of good sleep is sending far too many of our kids off to an unhealthy future well before they’ve graduated from high school.” He suggested that parents take advantage of lazier summer schedules to help kids get more and better sleep, and recommended that they urge their kids to eat a balanced diet, get plenty of exercise, and put away cell phones at night.