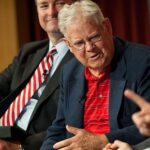 Researchers have identified an enzyme that plays a key role in malaria parasite replication in the human bloodstream. The Harvard T.H. Chan School of Public Health scientists say that developing drugs that target the enzyme could be a potential approach in efforts to treat and prevent the spread of the deadly disease.

People can become infected with malaria—which kills roughly 500,000 people every year—when bitten by mosquitoes carrying the malaria parasite, Plasmodium falciparum. Until now, the molecular mechanisms behind the parasite’s replication in the bloodstream have been mysterious. The parasites have a “bizarre” form of replication within red blood cells called schizogony, Ganter explained. In normal replication, one cell would split into two. In the malaria parasite, within one cell, the nucleus replicates first into two, then continues to replicate unabatedly, until it reaches about 16 before splitting to form daughter parasites. Through this process, malaria parasites replicate quickly in the bloodstream and can kill rapidly.

An enzyme known as P. falciparum CRK4 (PfCRK4) controls this replication and is active for most of the time the parasite is replicating within red blood cells, the researchers found. They also found that PfCRK4 plays a key role in the transmission of malaria from humans back to mosquitoes.