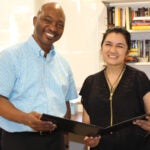 Joslin Diabetes Center’s Board of Trustees announced Wednesday that Roberta Herman has been selected as the center’s new president and chief executive officer, effective Jan, 9. 2020.

Herman replaces Peter Amenta, who announced earlier this fall that he would be stepping down at the end of this year, after 10 years with Joslin, including more than four as president and CEO.

“Roberta’s professional experience with both clinical and executive leadership positions at varied health care organizations makes her the ideal candidate to lead Joslin,” said Ann Lagasse, chair of Joslin’s Board of Trustees. “As a compassionate internist, Roberta’s focus has always been on quality care, accessibility and patient experience. She has worked on both the provider and payer side of healthcare, and understands the deep human and financial challenges of the diabetes epidemic. As Joslin continues to grow to address the prevalence of diabetes both nationally and globally, the Board looks forward to Roberta’s commitment to lead our researchers, clinicians, educators and staff so that we may continue to improve the lives of people with diabetes while supporting prevention and researching towards a cure.”

Joslin is known for its expertise in diabetes treatment and research and is dedicated to finding a cure for diabetes and ensuring that people with diabetes live long, healthy lives. Joslin is an independent, non-profit institution affiliated with Harvard Medical School, and one of only 16 NIH-funded Diabetes Research Centers in the U.S.

Herman comes to Joslin after nearly four years as executive director of the Group Insurance Commission (GIC), which provides and administers health insurance and other benefits to more than 450,000 employees and retirees of the Commonwealth, and their dependents. While there, Herman oversaw successful efforts to revamp the offerings of the GIC, created multiple new capabilities and efficiencies to improve interactions with GIC stakeholders and presented a strategic plan to optimize and grow the quasi-independent state agency.

“It has been my privilege to work with Dr. Roberta Herman for years, most recently during her service to the Commonwealth in her capacity as Executive Director of the Group Insurance Commission,” said Massachusetts Governor Charlie Baker. “Dr. Herman is an asset to the healthcare industry, and brings with her to Joslin a wealth of knowledge and experience that I am confident will prove invaluable in the fight against diabetes.”

“My career has frequently been focused on addressing population health challenges and I am honored to serve as the next President and CEO of this storied institution singularly devoted to addressing one of the most pressing national and international public health challenges of our time,” said Herman. “Since Dr. Joslin treated his first patient in Boston, people with diabetes have looked to Joslin for the latest in research discoveries, treatments and most importantly hope for the future. I am excited to be joining the extraordinary Joslin team and look forward to supporting Joslin’s very important mission.”

Previous to her service at GIC, Herman was the chief medical officer and then chief operating officer for Harvard Pilgrim Health Care, one of New England’s largest non-profit managed health care organizations. Before that, she had been chief of internal medicine at Harvard Community Health Plan’s Cambridge Center.

Prior to being selected as president and CEO, Herman also served as a trustee of Joslin Diabetes Center for six years. She has been a clinical instructor at Harvard Medical School with hospital appointments at Mount Auburn Hospital and Beth Israel Deaconess Medical Center and a guest lecturer at the Harvard School of Public Health. She also has been a faculty mentor in Brigham and Women’s Internal Medicine Residency.

Eliot Lurier, CPA, Joslin’s CFO/COO, will serve as Interim President and CEO in the short time prior to Dr. Herman’s start date.