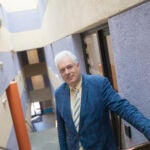 Jesse Hoffnung-Garskof has joined the Faculty of Arts and Sciences as the third senior faculty dedicated to the teaching and scholarship of ethnicity, indigeneity, and migration (EIM). A historian with expertise in Latinx Studies, international migration, and popular culture, Hoffnung-Garskof officially began his role July 1, but will be on leave until next summer.

The appointment also celebrates a return to Harvard for Hoffnung-Garskof, who earned his undergraduate degree in Social Studies in 1993. He received his Ph.D. in History from Princeton. Previous to joining the FAS, he served on the faculty in the departments of History and of American Culture, and in the program of Latino/a Studies at University of Michigan where he was also director of the Immigrant Justice Lab. He is the author of “Racial Migrations: New York City and the Revolutionary Politics of the Spanish Caribbean, 1850-1910” and “A Tale of Two Cities: Santo Domingo and New York after 1950.”

“I am immensely grateful for the opportunity to join the History Department and thrilled have the chance to contribute to the longstanding effort to build Ethnic Studies at Harvard.  It is exciting to be joining Professor Erika Lee, Professor Taeku Lee, other brilliant colleagues already at Harvard, and future EIM hires in this project,” he said. “I look forward, in particular, to working to develop ties between the EIM cluster and the Afro-Latin American Studies Research Institute, and to continuing the work I have been doing with students and community partners in the Immigrant Justice Lab at Michigan.”

“He has brought a keen, transnational view to how migrants from Latin America and the Caribbean engaged with, were influenced by, and transformed the U.S. scene as well reconfiguring racial politics in their countries of origin.  He is an innovative and prize winning teacher and built an exciting Immigrant Justice Lab.  We looking forward to him bringing his brilliant historical scholarship on the Latinx experience, teaching excellence, and commitment to social engagement on immigration issues  to Harvard.”

Hoffnung-Garskof is married to Paulina L. Alberto, who joined the FAS faculty in the Departments of African and African American Studies and of History July 1. A historian of Afro-Latin American lives, thought, and politics as they unfolded in the aftermath of slavery, particularly in Brazil and Argentina, she will also be on leave until next July.