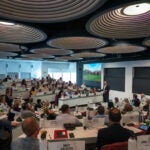 Inside the Bloomberg Harvard Negotiation for City Leaders program

Jeffrey F. Hamburger, the Kuno Francke Professor of German Art & Culture, was awarded the 2022 Gutenberg Prize of the International Gutenberg Society and the city of Mainz for his body of scholarship on the history of the book. The prize celebrates outstanding artistic, technical, and scientific achievements in printing.

Hamburger was recognized for his scholarly contributions to the study of art and the history of the book. His research on late Medieval art and cultural history focuses on the transition period from manuscripts to letterpress printing, specifically illuminated manuscripts. He has created many international exhibitions showcasing these manuscripts, including “Under Pressure. European Book Illumination in the Age of Gutenberg” (Munich-Vienna, 2015), “Beyond Words: Illuminated Manuscripts in Boston Collections (2016),” and “Imperial Splendor: The Art of the Book in the Holy Roman Empire, ca. 800–1500” (2021).

Hamburger has also published several books, including “Liturgical Life and Latin Learning at Paradies bei Soest, 1300–1425,” co–authored with Margot Fassler, Susan Marti & Eva Schlotheuber, “The Prayer Book of Ursula Begerin,” co-authored with Nigel Palmer, and “Color in Cusanus.” He has received fellowships and awards from the John S. Guggenheim Foundation, the American Philosophical Society, the NEH, Dumbarton Oaks, and the Humboldt-Stiftung.

“Life is full of surprises, and at least this is among the more pleasant,” said Hamburger about the honor. “It’s very gratifying to see work carried out over many decades recognized in this way by my German colleagues.”

The International Gutenberg Society and the city of Mainz have given out the prize since 1968 to scholars and craftspeople whose work intersects with the legacy of Johannes Gutenberg. Hamburger is one of two recipients of this year’s award; the other is Eckehart SchumacherGebler, a trained printer and typesetter.

Both Hamburger and SchumacherGebler “set the highest standards for their work in order to keep Johannes Gutenberg’s artistic legacy alive in a particularly impressive way in a wonderful harmony of all aspects,” said Michael Ebling, president of the International Gutenberg Society in Mainz and mayor of Mainz.