In liver, a stressed cell can be bad news for its neighbors 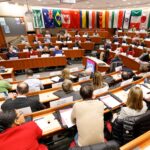 Advanced Leadership Initiative welcomes its most diverse group of fellows

A key protein in the communication channels between cells can allow a stress response in one liver cell to spread to neighboring liver cells in mice, causing otherwise healthy cells to become dysfunctional, according to new research co-led by Harvard T.H. Chan School of Public Health and Sheba Medical Center in Israel. The findings could have implications for a range of metabolic diseases, including obesity, diabetes, and non-alcoholic fatty liver disease (NAFLD).

The study is the first to demonstrate that the protein, Cx43, plays a role in the spread of endoplasmic reticulum (ER) stress signals among liver cells. Remarkably, the researchers noted, mice lacking Cx43 in their livers were protected from insulin resistance, glucose intolerance, and NAFLD.

The findings were published in Cell Metabolism on Dec. 18, 2020.

“We found that when a stressed liver cell starts communicating with its neighbors, it can send stress signals to neighboring cells, causing significant problems that can lead to fatty liver disease and metabolic disease,” said corresponding author Gökhan Hotamışlıgil, James Stevens Simmons Professor of Genetics and Metabolism at Harvard Chan School and director of the Sabri Ülker Center for Metabolic Research. “Here, we developed complex methods to follow molecular stress signals as they pass from one cell to another and, importantly, we showed that when these signals are stopped in the originating cell, metabolic health can be preserved even under adverse conditions such as obesity.”

Previous research in the Sabri Ülker Center has shown that in obese animals and humans, liver tissue experiences stress and dysfunction of the ER. It has, however, been challenging to understand why this powerful tissue failed to launch countermeasures to mitigate this problem. The researchers found in this study that once a small group of cells in the liver experience stress, it quickly spreads to the rest of the tissue, from cell to cell, overwhelming the tissue’s natural defenses.

For this new study, the researchers first screened billions of cells to find a few that naturally exhibit ER stress and others that have no sign of stress whatsoever. When they were grown next to each other, the stressed cells passed stress signals on to the healthy cells. The team then focused on liver cells isolated from mice. They experimentally induced ER stress in these cells and observed that levels and activity of Cx43 increased. As Cx43 activity increased, these cells became more capable of transmitting stress signals to nearby cells when compared with cells that were not under ER stress.

To build on these initial findings, the research team conducted a series of experiments on mice and determined that diet-induced obesity resulted in ER stress that in turn increased levels and activity of Cx43. The team then created a line of mice in which Cx43 had been deleted from the animals’ liver cells. In these mice, a high-fat diet did not trigger ER stress in liver cells, and the animals were protected from insulin resistance, glucose intolerance, and NAFLD.