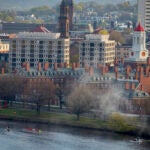 Since 2017, Margaret Kruk, M.P.H. ’00, associate professor of global health at the Harvard Chan School, has been chair of The Lancet Global Health Commission on High Quality Health Systems in the SDG [Sustainable Development Goals] Era. In that role, she has led an effort to review current knowledge, conduct new empirical studies, and offer policy recommendations for improving health care quality in low- and middle-income countries [LMIC]. The commission will be publishing its findings later this year.

Kruk’s quest to improve health care quality has taken her to Ethiopia, India, Liberia, Tanzania, and other countries. She began her public health career as a family medicine physician, running a regional hospital in Geraldton, an old mining town in northern Ontario. “It was Canada, so we had good funding, a good base, and good training. But we were very remote — three hours from the nearest surgical hospital, with the road ending 50 kilometers outside the community. Yet we were able to give good care, routinely and consistently. It was not just because of resources. It was a collective investment in the idea of a high-quality system.”

Q: Formal explanations aside, what motivated you to chair the Lancet commission?

A: On the one hand, we have been celebrating the accomplishments of health systems. We’ve reduced child mortality and infectious diseases, including HIV. At the same time, it’s a known fact that in most low-income countries, policymakers, health leaders, expats, and people who have any financial means would never use a country’s clinic when they themselves get really sick. They would find the first plane out.

And in my work in Tanzania and other countries, very poor women in remote areas would tell me, “Sure, distance is a barrier for us to get care. But is it actually worth it to even go to a clinic?”

These observations added up to a picture that health systems are not providing the care that people want or that will help them get better. We have talked about improving access as a marker of success. But if you stop at access, then once people enter the clinic door, our job is done. We never really looked under the hood.

Poor-quality care costs about 7 million lives a year in low- and middle-income countries. Those are very often lives of people who are young and in their most productive years, who could have been saved if the system had been able to respond.

Q: What are the main reasons for poor quality?

A: First, it has never been in the interest of either policymakers in-country or their global funders to dig into this. It feels far too difficult and too complicated. As a result, they haven’t been asking clinics to clear a particularly high bar.