How to see neurons in the dark 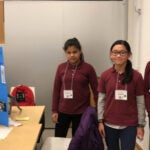 Walk outside on a clear summer twilight and you might see hundreds of minute lights spark and glow. Together, fireflies, which produce chemical light through bioluminescence, display a celestial pattern unlike anything on earth. Or, more precisely, unlike anything visible to our unassisted eyes.

In a darkness deeper than those summer twilights, our neurons fire and glow in a similar stellar dance. Now, with Firefly, a new microscope from the Cohen Lab, we can watch neurons pulse, communicate, and shine. The image is at once beautiful and invaluable — it could illuminate how disorders like epilepsy and Alzheimer’s disease affect neuron communication and thus enable researchers to discover how to prevent and treat a host of neurological diseases.

Firefly can resolve 85 neurons in 30 seconds. To accomplish this feat, Adam Cohen, Professor of Chemistry and Chemical Biology and Physics, and his team exploited a relatively new technique: optogenetics. With optogenetics, a fusion of optics and genetics, researchers modify cells to include genes with light-responsive properties. In this case, Cohen designed neurons to include light-sensitive proteins. Firefly can then capture light sparks representing each neuron’s electrical signals.

Although others have produced similar optogenetic tools, Firefly exceeds them in power and range. It can image a 6-millimeter-diameter area, more than one hundred times larger than most analogs. This broad field of vision offers unprecedented views of not just one but hundreds of neurons engaged in communication. Now, researchers can examine when and why communication fails. “This optical system provides a million inputs and a million outputs, allowing us to see everything that’s going on in these neural cultures,” Cohen explained. “The optical system must be highly efficient to detect good signals within a millisecond.”

Cohen’s research team tested the microscope on neurons and cultured heart cells, successfully mapping their electrical waves. While neuroscientists look for clues to treat epilepsy and Alzheimer’s disease, cardiologists can examine the abnormal heart rhythms to explore causes and solutions.

“The development of new biological sensors has made measurements that were impossible just a few years ago into something routine,” said Daniel Hochbaum, a member of the Firefly team. “This microscope … will profoundly increase the possibilities of high-throughput and high-content measurements with existing and future sensors of a diverse array of biological functions.”

The team already plans to expand their field of vision: “The system we developed is designed for looking at a relatively flat sample such as cultured cells,” Cohen said. “We are now developing a system to perform optogenetics approaches in intact tissue, which would allow us to look at how these neurons behave in their native context.”