How do bacterial species coexist? 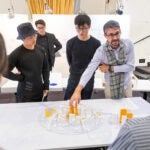 In a city defined by water, architects aim to turn threat to opportunity

A team headed by Rowland Institute fellow Katja Taute, and the AMOLF Institute’s Sander Tans and Tom Shimizu have discovered a new mechanism that explains coexistence of bacterial species. In their Feb. 19 paper published in Nature, they describe how the competition between “movers” and “growers” leads to a balance in which both types can continue to exist alongside each other.

Ecosystems are constantly subjected to perturbations ranging from climate change and forest fires on macroscopic scales to host feeding cycles and disease transmission on microscopic levels. But what makes ecosystems stable or fragile, and what prevents one species from outcompeting all others? Taute, who helped to guide the experiments at AMOLF and later oversaw the work at Rowland, said, “Bacteria offer an ideal model system for studying these questions experimentally — they replicate so fast that we can easily observe their population dynamics in the lab. “

To understand how bacteria coexist, Ph.D. student Sebastian Gude grew mixtures of two E. coli strains that were isolated from the feces of the same animal. In stirred liquid culture, however, one strain would always outgrow the other and ultimately drive it to extinction. Yet when the bacteria were grown from a drop injected into a nutrient-rich gel in a Petri dish, both species were still present after growth had spread, indicating that there were mechanisms at work that boosted whichever strain started out rare.

To resolve what rescued the previously weaker competitor from extinction, researchers turned to time-lapse fluorescence imaging. Movies revealed that, initially, a striking succession of events in how the bacteria spread through the gel. Initially, one strain would grow rapidly near the initial drop and slowly expand its territory around it. Then, its expansion would suddenly halt as the other strain appeared around the periphery of the first and began to rapidly capture the remaining outer territory. The result was a dot-and-donut pattern, with the two strains dividing up the territory between each other.

How did the two strains arrive at this arrangement? Did they exchange chemical signals, or poison each other? Using a combination of experiments, genetic engineering, and simulations,  researchers showed that no interaction between the strains is required. At the heart of the mechanism is a trade-off between moving fast and growing quickly.

“Like us, bacteria have different options for allocating their limited resources: One strain prioritized rapid growth, the other swimming fast — but they cannot excel at both,” Taute said. The “growers” always captured the territory around the initial drop. The “movers,” however, swam faster and eventually outran the first. Once they were far enough ahead that they consumed all local resources before the first strain caught up, the expansion of the latter was halted for lack of energy. The “movers” thus always captured the distant territory and the “growers” the nearby territory.

The discovery opens up the possibility that motility could contribute to species diversity in a wide range of habitats — perhaps even the human gut.