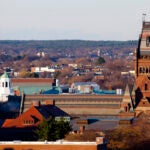 The 2018 EASD–Novo Nordisk Foundation Diabetes Prize for Excellence has been awarded to Gökhan Hotamışlıgil, J.S. Simmons Professor of Genetics and Metabolism and chair of the Department of Genetics and Complex Diseases at Harvard T.H. Chan School of Public Health.

The award is given annually to an internationally recognized researcher who has contributed significantly to diabetes research.

In a Sept. 18, 2018 press release announcing the award, the Novo Nordisk Foundation noted that Hotamışlıgil’s research led to the discovery that the protein adipocyte protein 2 (aP2), which is naturally expressed by human fat cells, is a novel hormone that greatly influences the development of diabetes and other diseases.

In the press release, Hotamışlıgil thanked his family, mentors, and students and fellows, noting that “without their dedication and diligence, none of the cited accomplishments would have been possible.”

With the cash prize that comes with the award, Hotamışlıgil said that he plans to investigate strategies to develop new therapeutic interventions for people living with diabetes and other metabolic conditions.