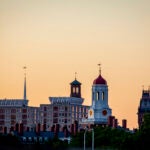 Andrew Bentley, M.P.A. ’20 had no idea how powerful this simple request would be.

Bentley said it started with the need to do something during the height of the COVID-19 pandemic in the U.S. A resident of Minneapolis, Minnesota, Bentley had met neighboring St. Paul Mayor Melvin Carter in 2019 while studying at Harvard. When COVID-19 grounded him, he felt he couldn’t just sit at home.

“I contacted the Mayor’s office and said, ‘Hey, I’m here to volunteer’,” he recalled. Bentley was impressed with how the administration worked during the coronavirus crisis. He was also impressed with the city’s dedication to community involvement. St. Paul had been  advancing its efforts to reimagine public safety since 2018 when the newly elected mayor began investing in community-first approaches such as empowering  a diverse group of residents to participate in the redesign of public service.

“It was after George Floyd was murdered, very close to where I live, that I knew this movement around transforming public safety was really unavoidable,” he said. “It was unavoidable in our work at [Harvard Kennedy School] for me personally.”

After graduation, Bentley joined HKS’s Government Performance Lab (GPL) as a project leader.  The GPL’s criminal justice practice was expanding, with a growing team of staff from all over the country rolling out new strategies to support jurisdictions in undertaking ambitious criminal justice reforms, from overhauling bail practices to building pathways out of the criminal justice system towards mental and behavioral health treatment.

In December 2020, the GPL and St. Paul agreed to collaborate on one of the City’s high priority initiatives — a   neighborhood commission, made up of 48 community members chosen by Carter to represent different affiliations and perspectives in St. Paul.

The final report has 11 recommendations around the development of an Office of Neighborhood Safety, which includes focusing on “gun violence” and “youth violence” programming, hiring community members impacted by violence in the office, and involving the community in governance.

The GPL recently announced that this initial project will be extended and expanded into a larger project supporting the implementation of some of the recommendations coming out of the commission. Gong sees this as a hopeful sign for the turmoil facing our communities.

“It is exciting to see St. Paul turn to the experiences and perspectives of a broad range of community stakeholders, particularly those from communities most impacted by current public safety practices, to help answer those pressing questions,” he said.

All the recommendations can be found in the full St. Paul Community-First Public Safety Commission report.